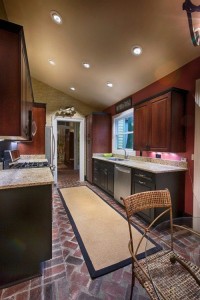 We remodeled last year; thought I would share some fun stories and maybe even some war stories from time to time.  This story has to do with my quest for much more light in my home.  I really don’t do well living in dark spaces.  I knew that when the time came to remodel, we would look forward to an updated lighting plan.  So I’m writing today about our recent realization that we achieved much more and better light AND real electricity savings.

Hubby created a graph of both gas and electricity usage and costs over the last six years.  The graphs are below for reference.  I coped them from his excel spreadsheet and can’t make them bigger, sorry!  I hope you get the idea.

Gas didn’t change much even though we went from a wimpy 4-burner range to a powerful 6-burner BlueStar range, and also gave up the wood burning fireplace in favor of a gas fireplace.  You will see from the graph that we typically turn on the furnace in the winter months and leave it off in the summer months.  I am very curious if the new gas fireplace makes a difference.  That was installed in late November 2013.  The high was $175/month and the current amount is $40/month.

Electricity has been trending down since 2008 in our household!  I wonder if part of the dip is the departure of our high school graduate for college in Fall 2009, but we can’t think of that much electricity that he would have been using.  What I find most interesting is that we continue to have lower costs than in the past, and this past winter was the lowest yet.  Also, the very low costs are continuing…  The ONLY thing that has changed is the addition of recessed LED ceiling lights.  The high was $114/month and the current amount is $42/month.

So now we have much more light in the house, and that makes me happy.  Also, we have reduced electricity expenses 22% comparing the years July 2012-June 2013 to July 2013-June 2014.  We have enjoyed a reduction in electricity costs in each of the last 12 months compared to the corresponding months a year earlier.

The remodel was primarily between July – November 2013.

ELECTRICITY USAGE IN BLUE; ELECTRICITY COSTS IN RED – MAY 2008 THROUGH MAY 2014.

Source:  PG&E bills from our home in El Granada, California.

COMPARE COSTS OF LED, CFL, and INCANDESCENT LIGHTING below.