May 16, 2013Giving Back, Half Moon Bay, Living Here, Neighborhoods

Locals know about it.  If you’re local and you don’t know about it, you do now.   Unlike it’s cousin, the Pumpkin Festival (both benefit our community), this event was a response to tragedy and then evolved into something bigger.  Wind the clock back to 2004:  “A block party and grand reopening celebration are scheduled for May 21, 2004, the one-year anniversary of the fire that gutted the stately building.”

In 2003, downtown’s historic Cunha’s Market caught on fire and burned to the ground.  This was not just any grocery store, it was the heart of our town.  Locals were greeted by owner, Bev Ashcraft, on a daily basis.   “She worked at the store her father formerly owned for more than 60 years…”.  They had the best meats, ice cream and staff in town.  I brought my kids to the store frequently to pick out treats and go shopping upstairs.  Many people spoke of the feeling of going back in time as you went through the well weathered general store-type front door.  We were living in Michigan when news of the fire broke.  We subscribed to the Half Moon Bay Review online to keep up with local happenings.  When we returned in summer 2003, the new store was already under construction.  It was eery to see the corner of Main & Kelly look so different.

The idea of a block party on Main Street to celebrate Cunha’s reopening was a natural.  It seemed such a good idea that our local Chamber has been hosting it ever since – to benefit local projects and scholarships.  And it’s been getting bigger and better every year.  So if you haven’t been yet, and you live here, come on down and meet your neighbors.  It’s a big outdoor party. 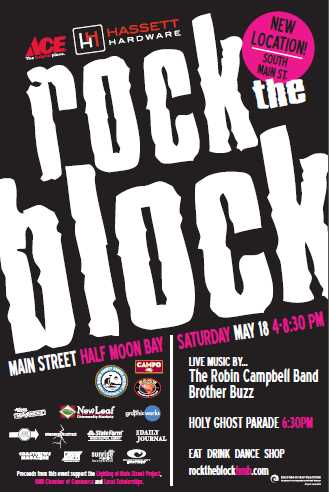 Same evening as the Portuguese Pentecostal Festival – IDES Hall and Main Street, May 18-19.

Note… Miramontes and Correas streets will be closed at 1pm so plan accordingly.

View Half Moon Bay, CA in a larger map