One Local’s Perspective on Mavericks 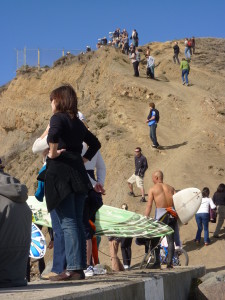 Local celebrity, bravery, celebration and respect.  This is what Mavericks – the word, the place and the contest means to me.

First year I was asked this question by one or both children:

A couple of years later:

Mom:  “What are you thinking about that?”

Child:  “I’ll find out what everyone else is doing and let you know.”

Mom:  “OK” (Important Note:  If my children were not good students, there would have been no room for discussion.)

This conversation took place between my children and me when they were in middle school and in high school – over 10 years ago.  We have lived in El Granada for 26 years.  One day a year, the kids wanted to flock to the bluffs and shores to feel the excitement of surfers who take on the big waves off our San Mateo County coast.  One year, hundreds of local kids called in “sick”.  Maybe that still happens today, I don’t know because my kids are now adults and employed (thank you to our schools for their contribution to this!).

The spirit of this contest brought the local kids together.  Most of them were not surfers.  Maybe they didn’t even know a surfer.  I know for my kids, it was a community event that was just theirs to experience as a “local”.  I imagine the surfers felt the same way within their community, but I don’t really know.  It did not belong to the rest of the world.

Fast forward to 2015.  The contest is now a big media event with worldwide exposure that seems to change every year depending on who is in charge.  That is understandable.  With 24 to 48 hours notice, I can imagine the challenges in pulling off a public event in a community like ours with so many factors to think about.  That means that for those of us who live here day in and day out, we don’t really know what each year’s contest will bring to our daily lives, including this year.  For this year, it will happen in the next month or we wait another year.

As far as small communities go, we get some national attention – the annual Pumpkin Festival, Mavericks Surf contest, and lately the Martin’s Beach access issue.  With three road access points (2 primary ones) coming in and out of town, that kind of exposure creates a lot of people coming into a community of less than 20,000 people along a small stretch of Highway One’s California coast.  Businesses, especially restaurants, bars and lodging benefit from this attention.

How could more local businesses benefit, even if the spaces don’t have a TV for viewing?  Why not offer “Mavericks Weekend” specials which include offers to “lifestyle” businesses like the bike shop, exercise classes, golf – a mix of local services that showcases how special it is to be here, all while helping other businesses also benefit from visitors already being here.

The competition takes place within the Monterey Bay National Marine Sanctuary (MBNMS).  Wildlife counts, human use counts, vessel counts, aircraft counts, and wildlife disturbance are all considered.  A Link to the 2008 study is provided below in “Sources”.

In  2010, a “surfonomics” study was released by Save The Waves Coalition which measured the economic value of the big-wave break at Mavericks in Half Moon Bay.  The study found that the surfing site and area has an estimated economic value to visitors of nearly $24 million per year, based on approximately 420,000 annual visitors.

The other interesting finding is that almost 90% of respondents labeled surfing an ecotourism activity, therefore important to the cultural and environmental health of the community.  Respondents believed that the now world-famous Mavericks helped to positively define the Half Moon Bay area.

Last But Not Least – Community

People who moved to the Half Moon Bay area years ago did so for any number of reasons, which may have included fresh air, beautiful beaches, wildflower sprinkled hiking trails, and a quaint downtown reminiscent of yesteryear.  None of the reasons included waiting in long traffic lines, not being able to get into a favorite restaurant to enjoy a special dish and a friendly wait person, or not being able to get to a doctor’s appointment on time due to many out of town drivers here all at once who don’t know our roads.   At certain times of the year, we must share our local treasures with the rest of the world.  This takes adjustment, patience and planning.  Check out Connect the Coastside for plans to address Highway 1 transportation concerns for us.

1999 – the first competition was held off the Pillar Point Harbor area in Princeton-Half Moon Bay, California.  Darryl “Flea” Virostko won the first contest at the site.

2004 – The contest is managed by Mavericks Surf Ventures (MSV).

2009 – 13 people were injured and thousands of dollars in property damage occurred by a rogue wave.  Both judges and spectators were too close to posted danger signs.

2010 – No contest due to surf conditions.  Sponsors came and went over the last several years.    “The Value of a Wave: An Analysis of the Mavericks Region and the Mavericks Wave from an Ecotourism Perspective,” was conducted by University of Hawaii Economic Research Organization, in partnership with the Center for Responsible Travel at Stanford University, under the guidance of Save The Waves Coalition.

2011 – San Mateo County Harbor District takes the rights to hold the competition and grants them to a group of local big-wave surfers forms The Half Moon Bay Surf Group.  The group re-names the competition “The Jay at Mavericks Big-Wave Invitational”.  The plan is to bar spectators from the bluffs and water’s edge and increase security.  At some point their name may have changed to Mavericks Community LLC.

2012 – Chasing Mavericks, the movie about Jay Moriarity, is released.

2014 – The contest is called The Body Glove Mavericks Invitational surf competition.  A festival is held in the Harbor Village parking lot with a fee to enter.

2015 – The contest is now called Titans of Mavericks, owned by Los Angeles based Cartel Management.  A spokesman for the surfers says of the new organization says “I believe he will change the face of big-wave surfing with this competition. If he can’t do it, then Mavericks is not meant to be on a big scale.”  It has not occurred yet this season.

Here it is – a Mavericks wave.  Photo credit: North Cossman.  North is a 15 year old Half Moon Bay High School student who takes pictures of every day life here, of which Mavericks is one of them.