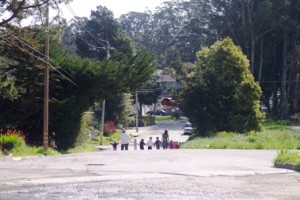 A mid-day walk along one of the wide lower El Granada avenues.

I had to capture this lovely scene as I was recently driving around town on a recent Tuesday morning Broker Tour of new listings.  Glad I had my camera for this one.

It brought back memories of when I was the parent of a preschooler – a few moons ago…  My daughter attended Marty’s Alameda Station in El Granada and even now, as a college student, has continued friendships from the buddies she made while at Marty’s.