A Community with Heart 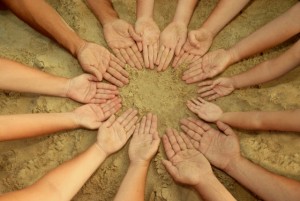 It’s not just a delicious spaghetti dinner at the Community Center…it’s an opportunity for individuals who make up our community to get together (something I don’t do enough of these days).  You meet someone new every time, you sit next to someone who you’ve known but never chatted with, one thing leads to another, it’s all good, and community thrives some more.

The Half Moon Bay Coastside  Boys & Girls Club chose this venue to acknowledge the “unity” of the Coastside, according to President, David Cline.  Expect to hear more about the theme of “Community Unity” for Half Moon Bay area non-profit organizations!

One Club member, a handsome young man, was honored with a “Youth of the Year” award for his participation and achievements.  Also honored was Boys & Girls Club Executive Director Anna McDevitt with a “From the Heart” award.

It’s cool to continually learn new things about the place you live, even after being here for over 20 years.  I learned that the Surf Club partnered with the Boys & Girls Club to help with academic achievement of the young surfers.  The average GPA for middle and high school surf club members is 3.54; good for them!!

Non-profits quietly do their good without much fanfare.  The first annual “Community Unity” event sponsored by the Coastside Boys & Girls Club was a delight to attend.  The kids served the adult guests delicious salad, spaghetti and gelato!

Boys & Girls Club of the Coastside